Rodriguez and Özcan: “Do your share, submit your pledges to eradicate child labour”

On the International Year for the Elimination of Child Labour, the UN Turkey Officer in Charge and ILO Turkey Director call for taking action to end child labour through individual and corporate pledges 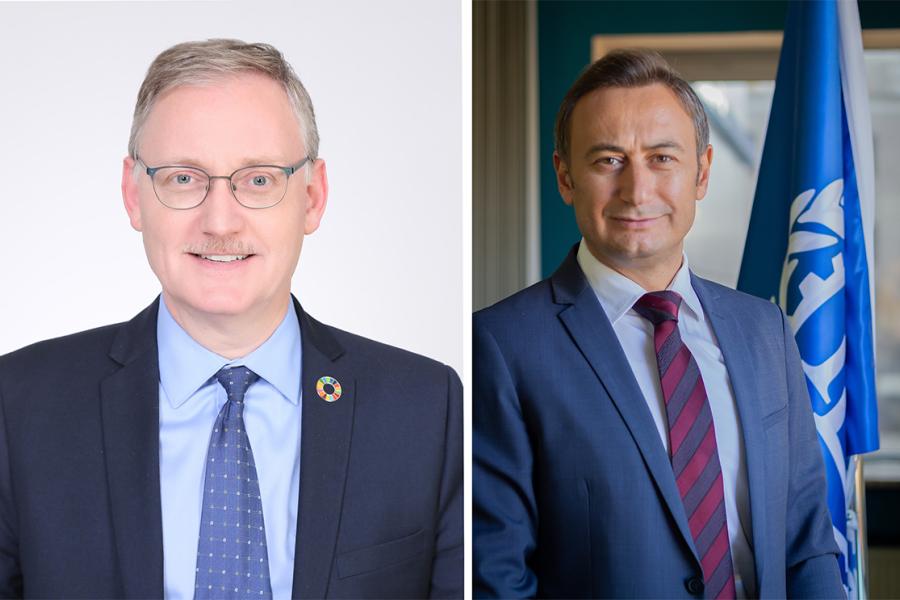 The UN General Assembly (UNGA) declared 2021 as the Year for the Elimination of Child Labour on 28 July 2019 and has urged the international community to step up efforts to eradicate child labour[1].

The UNGA unanimously adopted this resolution, which highlights the member States’ commitments “to take immediate and effective measures to eradicate the worst forms of child labour, and by 2025 end child labour in all its forms.” It is also included under Target 8.7 of the Sustainable Development Goal, adopted by all UN Member States in 2015. The Sustainable Development Goals are a global call for action to end poverty, protect the earth’s environment and climate, and ensure that people everywhere can enjoy peace and prosperity. The SDGs consist of 17 goals and 169 targets that are integrated and interconnected and balance the economic, social, environmental dimensions of sustainable development.

Naturally, this year, more than ever, we need to scale up our actions further to focus attention on the millions of girls and boys still sweating in the fields and factories.

We are all together in this!

ILO with all Member States, other organizations of the United Nations system, international and regional organizations and civil society, including non-governmental organizations (NGOs), private sector representatives, individuals and all other relevant stakeholders will observe the International Year through activities aimed at raising awareness of the importance of the eradication of child labour, and to share the efforts and best practices in this regard.

Convention on the Rights of the Child, ILO Convention 182 on the Elimination of the Worst Forms of Child Labour and ILO Convention 138 on the Minimum Age of Employment all recognize the right of every child to be protected from economic exploitation and from performing any work that is likely to interfere with the child’s education or harm the child’s health.

Universal ratification of ILO Convention 182 on the Elimination of the Worst Forms of Child Labour in 2020 was an historic moment. It means that all children around the world now have legal protection against the worst forms of child labour. This universal ratification reflects a global commitment that the worst forms of child labour compromises children’s health, morals or psychological wellbeing, and have no place in our society.

Substantial progress has been achieved in recent years, largely because of intense advocacy and national mobilization backed by legislative and practical action. Between 2000 and 2016 alone, there was almost 40 per cent decrease in child labour globally. Yet, 152 million children across the world are still in child labour, 72 million of which are in hazardous work.

The COVID-19 pandemic risks reversing the significant progress of the last two decades. The pandemic has increased economic insecurity, profoundly disrupted supply chains and halted manufacturing. When these and other factors result in losses in household income, expectations that children contribute financially can intensify. More children could be forced into exploitative and hazardous jobs. Those already working are now at even greater risk of facing circumstances that are even more difficult and working longer hours. Gender inequalities may grow more acute within families, with girls expected to perform additional household chores and agricultural work. Temporary school closures may exacerbate these tendencies, as households look for new ways to allocate children’s time.

The impact of having to work at a young age for a child can be devastating and long-lasting: the child risks losing out on her/his education, being deprived of basic health care and exposed to dangers and hazardous practices.

This is why the representatives of the United Nations in Turkey have been working with the Government of Turkey for ending child labour.

We, as the UN Turkey Officer in Charge and Director of ILO Office for Turkey are calling on all stakeholders to choose a specific action that contributes to ending child labour which can be achieved by within this year, 2021.

Everyone can make a difference. National and local government institutions can take measures to make sure full compliance to national legislation on combatting child labour. Employers and businesses can adopt business principles upholding child rights and commit to supply chains free of child labour. Individuals can make personal choices to consume responsibly, raise funds and demand that their governments accelerate action.

Working together, individuals and institutions have the power to transform the International Year into a sustained global movement for children. Now is the moment to act, inspire and scale up!

We are calling everybody to tell the world about their Action Pledges in Turkey on social media with the hashtag #EndChildLabour2021.

Are you ready to submit your Action Pledge?

The deadline to submit is 30 March.

Our goal – the elimination of child labour – is within reach. We must act now!

Turkish Statistical Institute (TurkStat) conducted Child Labour Force Surveys in 1994, 1999, 2006, 2012 and 2019. Considering the results of Child Labour Force Surveys, there is a decreasing trend in number of children in economic activity. According to the results of 2019 Survey, 720 thousand children in the age group of 5-17, which account for 4.4 % of total child population in the same age group, were engaged in economic activity.

The Resident Coordinator is leading and strategically positioning the United Nations country team in Turkey to respond to the current national priorities.

[1] ILO: Child Labour is defined as work that deprives children of their childhood, their potential and their dignity, and that is harmful to physical and mental development.