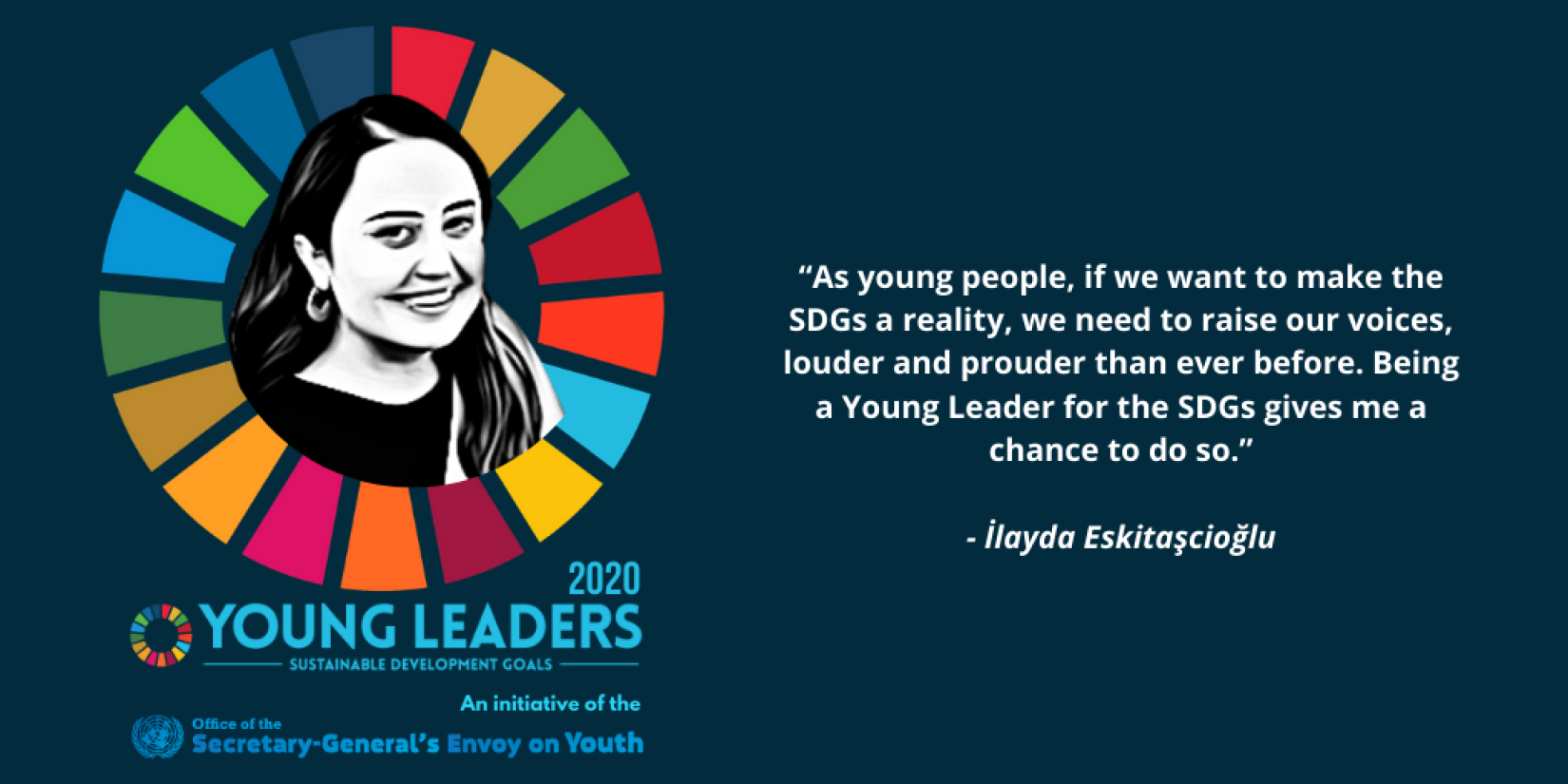 On a biennial basis, the Office of the Secretary-General’s Envoy on Youth recognizes 17 young changemakers who are leading efforts to combat the world's most pressing issues and whose leadership is catalyzing the achievement of the SDGs.

“As the UN marks its 75th anniversary during unprecedented times, the 2020 Young Leaders for the SDGs are a clear example of how young people are leading the way in shaping a more sustainable and inclusive future for all,” said Jayathma Wickramanayake, the UN Secretary-General’s Envoy on Youth.

”Despite being disproportionately impacted by COVID-19, young people around the world continue to demonstrate immense resilience, resourcefulness and leadership in finding innovative solutions to recover better and achieve the SDGs.”

These young leaders — between the ages of 18 and 29 years old — represent the diverse voices of young people from every region of the world, and are collectively responsible for activating millions of young people in support of the SDGs.

This group will come together as a community to support efforts to engage young people in the realization of the SDGs both through strategic opportunities with the UN and through their existing initiatives, platforms and networks.

“As young people, if we want to make SDGs a reality, we need to raise our voices, louder and prouder than ever before. Being a Young Leader for the SDGs gives me a chance to do so.” says İlayda Eskitascioglu who founded We Need to Talk, an NGO that aims to provide sanitary materials to rural women in Turkey (seasonal agricultural workers, Syrian refugees, and pre-teen) and destroy the stigma around it, in 2016.

The 2020 Young Leaders for the SDGs are:

More information on the 2020 Young Leaders for the SDGs, including the full profiles of the Young Leaders and their commitments to advancing the SDGs, is available at un.org/youthenvoy/about-theyoung-leaders-for-the-sdgs.

In 2017, the UN Secretary-General appointed Jayathma Wickramanayake of Sri Lanka as his Special Envoy on Youth and as the youngest senior official in the history of the organization. Ms. Wickramanayake's mandate is to harmonize the UN system efforts on youth development, enhance the UN response to youth needs, advocate for the development needs and rights of young people, as well as to bring the work of the United Nations on youth closer to them.

The Envoy on Youth also acts as the advisor to and the representative of the Secretary-General on youth related matters. For more information, follow @UNYouthEnvoy on social media and visit our website at un.org/youthenvoy.

Media Contact Office of the Secretary-General’s Envoy on Youth

Profiles of all 17 Young Leaders for the SDGs:

Mariama is a young entrepreneur of green and smart architecture. She is the CEO of DNA SARL, a company specialised in ecological building using natural, local, no industrialized materials like earth bricks and Typha. They purposely create bioclimatic buildings that combine comfort and energy efficiency in order to improve our living conditions.

Hadiqa is a young activist calling for an end to early and forced marriages. She is the founder of Girls United for Human Rights and is working for the protection and promotion of Girls Rights in the Tribal Regions of Pakistan especially in Khyber PakhtunKhwa, Pakistan.

Siena is an autism and neurodiversity advocate. She is the founder of Neurodiversity Celebration Week, which aims to encourage schools to recognise the strengths and talents of their students with special educational needs, instead of just focusing on their weaknesses and difficulties. She is also the author of the Spectrum Girl’s Survival Guide: How to Grow Up Awesome and Autistic.

İlayda is a fighter against period poverty. She founded "We Need to Talk”, an initiative that aims to provide sanitary materials to rural women in Turkey and to destroy the stigma around it. The initiative targets three groups of women: seasonal agricultural workers, Syrian refugees, and pre-teen who are going to school in remote rural areas.

Martin is a LGBTQ activist and chair of the first Global LGBTI Youth Steering Committee at ILGA World. He advocates for mainstreaming LGBTI youth issues on a global level and fights to ban all harmful practices (conversation therapies, IGM, forced sterilisations) and repealing all laws that prosecute and discriminate against them.

Jichen is a young social entrepreneur. He is the founder of Vevolution Tech and Clear Plate APP which has the mission to reduce food waste through education and incentives.

Vanessa is a climate activist. She is the founder of the Rise Up Movement seeking to amplify the voices of Africa within the climate movement. This movement has extended to countries such as Kenya, Nigeria, Somalia, Togo, South Africa, Zambia and Uganda.

Oluwaseun strives to end sexual violence. She is the founder of Stand to End Rape Initiative (STER) to engage in policy advocacy, lead innovative programs towards the elimination of SGBV and provide pro bono holistic support to survivors. The organization has provided support to over 350 women, girls, boys and men and reached about 200,000 Nigerians with information. She is awarded 2019 TIME 100 & Commonwealth Person of the Year.

Loay is an environmental engineer. He is the founder and CEO of G-Beetle, which tackles the water crisis and crop protection problems to overcome the effects of climate change. They provide farmers with a rover equipped with sensors and machine learning algorithms that manoeuvres the fields collecting data about the moisture content and the plants’ state.

Tania is the founder of the El Origen Foundation, an indigenous-first model that provides at-risk youth with a second chance at education and works to close the illiteracy gap for indigenous youth.

Satta Sheriff is the founder and Executive Director of Action for Justice and Human Rights (AJHR), a ngo founded to advocate and ensure access to justice and respect of human rights in Liberia. AJHR is breeding a society of young leaders that advocate increase access to social justice while preaching peace for equal rights. Satta is founding member of the Global Youth Leadership Council and a recognized member of the 50 most impacting young females Leaders in Africa 2017 (One World Foundation). She's the former Speaker of the Liberian Children’s Parliament and co-founded the Joint Action Committee on children.

Udit is the founder of Glass2Sand, an environment-friendly project that addresses the growing menace of glass bottles being dumped to landfill. The project uses an innovative New Zealand technology to crush these bottles into silica-rich sand to create a “zero waste” eco-system. Facebook Twitter: @_uditsinghal @glass2sand Instagram: @uditsinghal_, @glass2sand

Tim is the founder and national director of Democracy in Colour, Australia’s first racial and economic justice organisation led by people of colour. He currently serves on the Boards of Plan International Australia Environment Victoria (peak environmental advocacy organisation in Victoria), Climate for Change (the only organisation training people to have effective conversations about climate change), The Wilderness Society (an organisation that has led Australia’s most historic environmental campaigns), and Be Slavery Free (a coalition of 40 organisations tackling modern slavery). Facebook Twitter: @timlosurdo, @democracycolour Instagram: @timlosurdo, @democracyincolour

Ralf is the founder and CEO of two national organizations Renovatio, a non-profit, and VerBem, a social business with the mission to democratize the access of eye care in Brazil and internationally. Renovatio/VerBem has been able to supply more than 150K people with correct eye care and donate more than 60,000 eyeglasses to people in a vulnerable situation in 21 of the 26 states in Brazil and also in Mozambique, Haiti, and India. He was awarded Forbes 30 Under 30 in 2017.

Lester Philipp is the co-founder and co-CEO of FractalUp, a AI-enabled virtual education/Learning experience platform for +8 000 000 students in Peru approved by the Ministry of Education in 2020. The company received a grant for acceleration in Latam by The World Bank. He was awarded Forbes 30 Under 30 (Education) in 2015.

AY is a sustainable artist and advocate for renewable energy. He is the creator of the "Battery Tour" where every event/concert/experience is powered by renewable energy. He uses his events to connect to communities at a local level and educate people on practicing sustainability, raising awareness, sustainable solutions, and building a network of change makers. Facebook Twitter: @aymusik @batterytour Instagram: @batterytour @aymusik