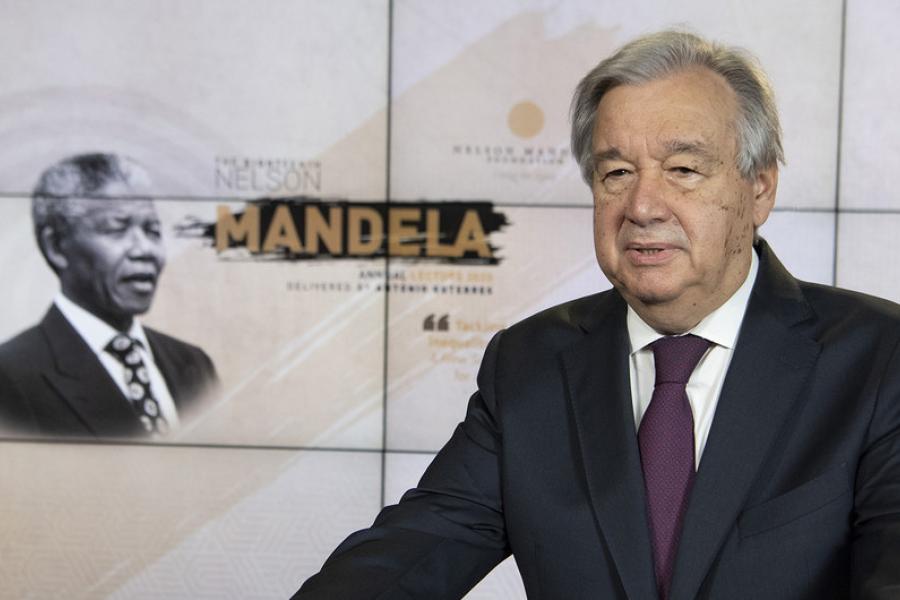 Inequality, an issue which “defines our time”, risks destroying the world’s economies and societies, UN Secretary-General António Guterres said in a hard-hitting speech on Saturday.

Mr. Guterres was delivering the 2020 Nelson Mandela Annual Lecture, held online for the first time, in light of the ongoing COVID-19 pandemic. The lecture series, held annually by the Nelson Mandela Foundation, on the birthday of the first democratically-elected President of South Africa, aims to encourage dialogue by inviting prominent personalities to discuss major international challenges.

“COVID-19 has been likened to an x-ray, revealing fractures in the fragile skeleton of the societies we have built, said Guterres adding, “It is exposing fallacies and falsehoods everywhere:”

“The lie that free markets can deliver healthcare for all;

The fiction that unpaid care work is not work;

The delusion that we live in a post-racist world;”

Mr. Guterres noted that the COVID-19 pandemic has played an important role in highlighting growing inequalities, and exposing the myth that everyone is in the same boat, because “while we are all floating on the same sea, it’s clear that some are in superyachts, while others are clinging to the floating debris.”

Global risks ignored for decades – notably inadequate health systems, gaps in social protection, structural inequalities, environmental degradation, and the climate crisis – have been laid bare, he said. The vulnerable are suffering the most: those living in poverty, older people, and people with disabilities and pre-existing conditions.

Mr. Guterres pointed out that inequality take many forms. Whilst income disparity is stark, with the 26 richest people in the world holding as much wealth as half the global population, it is also the case that life-chances depend on factors such as gender, family and ethnic background, race and whether or not a person has a disability.

So when the richest children are seven times more likely than the poorest to attend pre-school, it is no surprise that inequality is inter-generational.

However, he noted that everyone suffers the consequences, because high levels of inequality are associated with “economic instability, corruption, financial crises, increased crime and poor physical and mental health.”

Colonialism, a historic aspect of inequality, was evoked by the Secretary-General. Today’s anti-racist movement, he said, points to this historic source of inequality: “The Global North, specifically my own continent of Europe, imposed colonial rule on much of the Global South for centuries, through violence and coercion.”

This led to huge inequalities within and between countries, including the transatlantic slave trade and the apartheid regime in South Africa, argued Mr. Guterres, and left a legacy of economic and social injustice, hate crimes and xenophobia, the persistence of institutionalized racism, and white supremacy.

“Africa has been a double victim” he said,

“First, as a target of the colonial project. Second, African countries are under-represented in the international institutions that were created after the Second World War, before most of them had won independence” he added.

Secretary General said that the nations that came out on top more than seven decades ago have refused to contemplate the reforms needed to change power relations in international institutions. Guterres added the composition and voting rights in the United Nations Security Council and the boards of the Bretton Woods system are a case in point.

“Inequality starts at the top: in global institutions. Addressing inequality must start by reforming them” he emphasized.

Mr. Guterres also referred to patriarchy, another historic inequality which still resonates: women everywhere are worse off than men, and violence against women is, he said, at epidemic levels.

The UN chief, who described himself as a proud feminist, said he was committed to gender equality, and has made gender parity a reality across senior UN posts. He also announced his appointment of South African international rugby captain, Siya Kolisa, as a global champion for the Spotlight Initiative, which aims to engage men in fighting violence against women and girls.

Turning to contemporary inequality, Mr. Guterres said that the expansion of trade, and technological progress, have contributed to “an unprecedented shift in income distribution”. Low-skilled workers are bearing the brunt, he warned, and face an “onslaught” from new technologies, automation, the offshoring of manufacturing and the demise of labour organizations.

Meanwhile, he continued, widespread tax concessions, tax avoidance and tax evasion, as well as low corporate tax rates, mean that there are reduced resources for social protection, education, and healthcare - services that play an important part in reducing inequality.

Some countries have allowed the wealthy and well-connected to benefit from tax systems, but “everyone must pay their fair share”, said Mr. Guterres, and governments need to tackle the “vicious cycle” of corruption, which weakens social norms and the rule of law, and shift the tax burden from payrolls to carbon, which would help to address the climate crisis.

Although climate change is a global problem, the effects are felt most keenly by those countries which are least to blame. The issue is likely to become more pronounced in the coming years, and millions risk malnutrition, malaria and other diseases; forced migration, and extreme weather events.

The only way towards a fair and sustainable future for all, he suggested, involves what he called a “New Social Contract”, which allows young people to live in dignity; women to have the same prospects and opportunities as men; and protects the vulnerable,  and a “New Global Deal”, which ensures that power, wealth and opportunities are shared more broadly and fairly at the international level.

As part of the New Social Contract, labour market policies would be based on constructive dialogue between employers and workers, and would ensure human rights and fundamental freedoms.

The Secretary-General called for new social safety nets, including universal health coverage, the possibility of universal basic income, boosted investment in public services, and, to reverse long-standing inequalities, affirmative action programmes and other policies to address inequalities in gender, race or ethnicity.

The UN chief explained that quality education for all, and the effective use of digital technology, will be crucial to achieving these aims.

Governments also need to transform the way children are taught, said Mr. Guterres, and invest in digital literacy and infrastructure, and help them to prepare for a rapidly changing workplace that is being upended by technology.

The Secretary-General outlined some of the ways that the UN is supporting these efforts, including The Roadmap for Digital Cooperation, launched at the United Nations in June, which promotes ways to connect four billion people to the Internet by 2030,  and “Giga”, an ambitious project to get every school in the world online.

‘We stand together, or we fall apart’

The UN chief ended his major strategic vision statement, by invoking the importance of international cooperation and solidarity.

“We belong to each other”, he said. “We stand together, or we fall apart”.

The world, he concluded, is at breaking point, and it is time for leaders to decide which path to follow. The choice presented by Mr. Guterres, is between “chaos, division and inequality”, or righting the wrongs of the past and moving forward together, for the good of all. 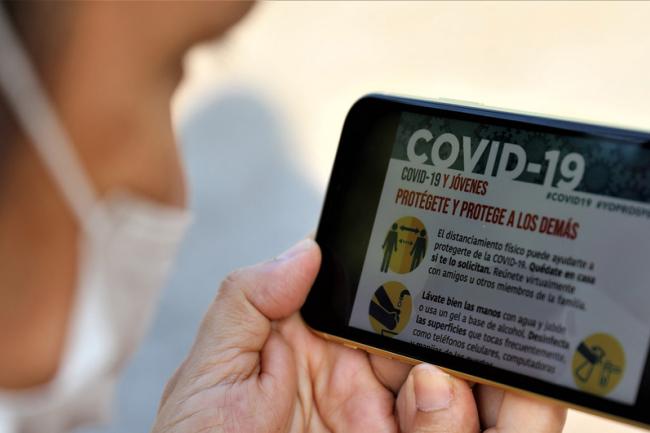 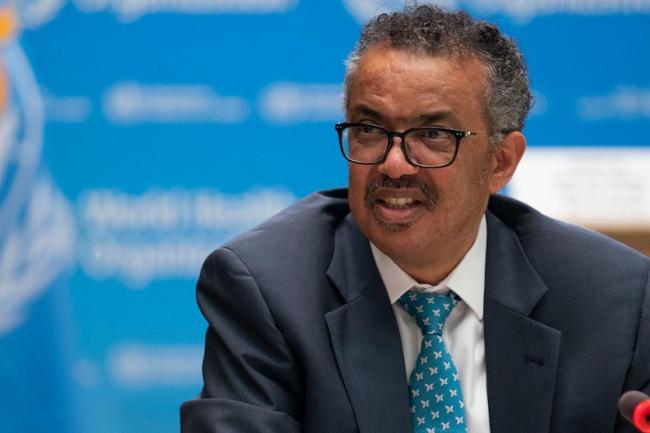 Using the principle of “herd immunity” to stem the pandemic is “unethical” and “not an option” countries should pursue to defeat the virus said WHO chief.