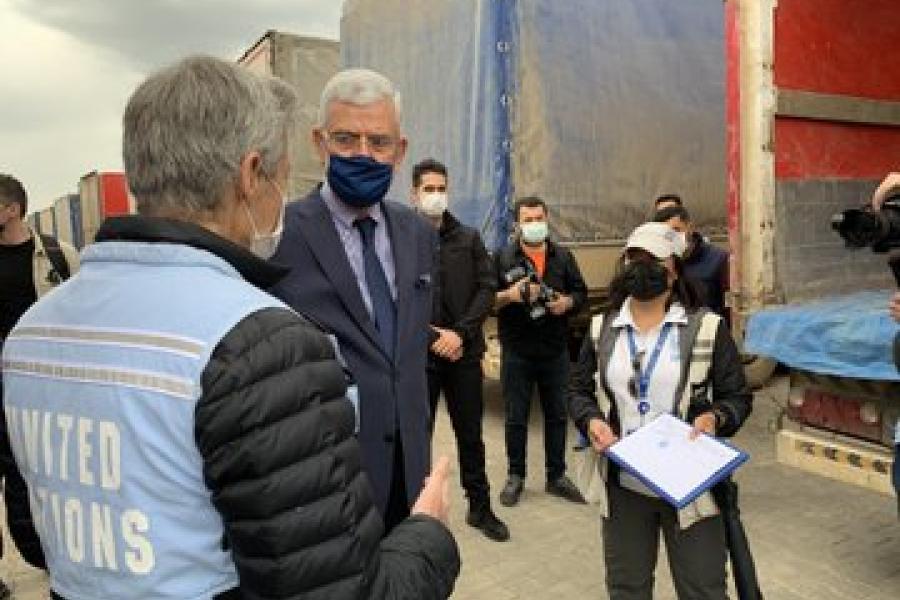 Soon after arrival, he met with the Governor of Hatay, Mr. Rahmi Doğan. They discussed UN-Turkish cooperation, which they deemed necessary for the provision of aid by the Office for the Coordination of Humanitarian Affairs (OCHA) to northwest Syria. The Governor updated President Bozkır on the situation of the approximately 450,000 Syrian refugees living in Hatay.

The President then visited the United Nations’ transshipment hub in Reyhanlı, where he was briefed on OCHA operations by Mr. Mark Cutts, United Nations Deputy Regional Humanitarian Coordinator for the Syria Crisis, and Ms. Catherine Alcaraz, Deputy Director of the United Nations Monitoring Mechanism (UNMM). He also observed the delivery process, including procedures for loading aid shipments onto trucks and monitoring their contents.

Speaking to the press afterwards, he said that, as the President of the United Nations’ most representative body, he was calling on the Security Council to ensure that the vital cross-border operations he had seen would continue uninterrupted.

He expressed concern that there was only one authorized border crossing, which was not sufficient to meet Syrians’ rising humanitarian needs. He underscored the need to expand operations. He stressed that no country had the luxury to stop the cross-border operations during a crisis of such magnitude.

The President then visited the Cilvegözü Border Gate, where Hatay Deputy Governor Salih Altun described Turkey’s role in cross-border humanitarian efforts. Mr. Bozkır was presented with an oil painting made by a Syrian refugee child.

Following a stop at the Cilvegözü Border Gate, at the Turkish-Syrian border, the President traveled to the Bükülmez border post overlooking Atme Tent City, which houses internally displaced Syrians.

He then visited the Boynuyoğun Temporary Accommodation Center, a camp for Syrians who have sought refuge in Turkey. There he stopped by the camp's orphan center, gave gifts to children, saw a computerized library and spoke with Syrians who were earning income through such activities as growing strawberries, running shops, and making and embroidering clothing.

He then toured the Altınözü Culture and Art Center, where he saw production workshops run by that cooperative, which was established by Syrian and Turkish women.

The President plans to return to New York on 12 April.